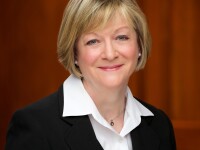 Sister Bonnie L. Oscarson was called as the Young Women general president in April 2013 and released on March 31, 2018. She was born in Salt Lake City, Utah, USA, but her family moved often and she lived in five different places in the United States before attending Brigham Young University to study commercial art. She met her husband, Paul Oscarson, at the temple site in Far West, Missouri. They later married in 1969 in the Salt Lake Temple and are the parents of seven children and grandparents of 29 grandchildren.

She served with her husband when she was still a young mother as he presided over the Sweden Göteborg Mission (1976–1979) and then 30 years later returned to Sweden where she and her husband served as matron and temple president of the Stockholm Sweden Temple (2009–2012). She has served as a ward Young Women president three times, in a stake Young Women presidency twice, and taught early morning seminary for nine years. Sister Oscarson loves working with the youth of the Church. She doesn’t regret any of the sleep she missed while teaching seminary. She returned to school after 35 years and earned a bachelor’s degree with an emphasis in British and American Literature. One of Sister Ocarson’s favorite scriptures is in Doctrine and Covenant 101:16 “Be still and know that I am God."