The inauguration will take the place of the regular weekly devotional. Sunday dress is requested for all those in attendance. The proceedings will not be broadcast and Assembly Hall seating is limited to first-come, first-served.

President Dieter F. Uchtdorf, second counselor in the First Presidency and second vice-chairman of the Church Educational System Board of Trustees, will preside at the event to officially install President Kusch as 13th president of LDS Business College. Elder Dallin H. Oaks, chairman of the Executive Committee of the CES Board of Trustees, will conduct the inaugural ceremonies. Elder Kim B. Clark, CES commissioner, along with President Kusch and President Uchtdorf, will provide remarks.

Music will be provided by the BC Choir along with LDSBC faculty and staff.

Prayers will be offered by members of the CES Board: Bishop Gérald Caussé and Sister Bonnie L. Oscarson.

Participants are encouraged to be in their seats in the Assembly Hall by 10:45 a.m.

A reception, with refreshments, will be held on Oct. 24 in the Multipurpose Room at LDS Business College from 3 to 5 p.m.

The inaugural ceremonies and reception are open to the public. No advance registration is required.

Persident Kusch will host a luncheon following the inaugural ceremonies for invited guests.

For more information about the inauguration, please contact the Office of the President at 801-524-8106 or inauguration@ldsbc.edu.

Members of the media should contact the College at 801-524-8174 or news@ldsbc.edu to make reservations for reserved seating at the inauguration. 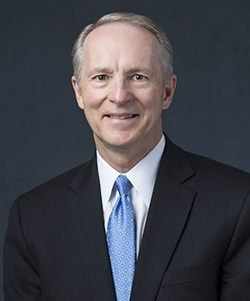 In July 2008, he was named associate academic vice president for curriculum at BYU–Idaho, serving in that position until June 2012 when he was called to serve as president of the Mexico Cuernavaca Mission.

Prior to joining the BYU-Idaho faculty, President Kusch worked as a sales and marketing executive and management consultant for various high-technology firms in the San Francisco Bay Area.

President Bruce C. Kusch became the 13th president of LDS Business College on April 17, 2017, where he had been serving as its chief academic officer since March 2016.

President Kusch and his wife, Alynda, were married in the Los Angeles California Temple in 1974. They are the parents of four children and 21 grandchildren. His personal interests include running, biking, fly fishing, photography and outdoor cooking.