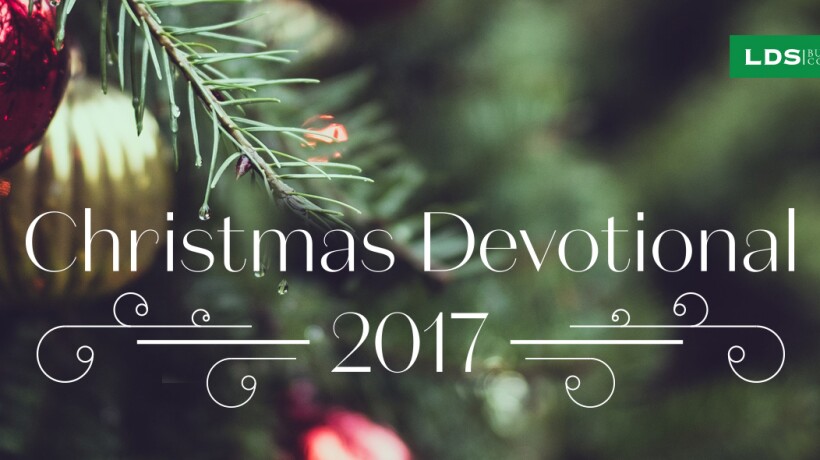 Darkness to Light: A Missionary Christmas

Brothers and sisters, I am very grateful for this opportunity today and very humbled to have been asked to share my brief remarks. First of all, thank you choir—that was amazing. I so much appreciate the talents of our wonderful choir and Brother Decker.

And as I tell you these experiences, brothers and sisters, I want to compare some lessons that I learned during that Christmas experience. Brothers and sisters, just like full-time missionaries, you and I are away from home—we’re away from our Heavenly home. Here on earth is very different from where we came from. The culture is different; the people are different. Everything is different, and we can experience some of the similar feelings that I had as a full-time missionary.

As we got close to Christmas, my companion and I decided that we needed to spruce up the apartment a little bit and make it look more like Christmas. Of course, there was no money for a Christmas tree and no time to decorate it, but what we did do was we found a broken piece of a pine tree branch. We brought that into our apartment, took an old pop bottle, stuck the branch in the pop bottle, and said that will be our Christmas tree. It was pathetic. So, we decided that we needed to decorate that little humble Christmas tree. So, with stale popcorn, needle, and thread, we made a garland. We were quite proud of our garland. But it needed something extra, so we took some wads of paper, made balls, tied them with string, and hung them on our little Christmas tree branch. Those were our ornaments. But something still was missing. It needed something at the top. We didn’t have a star, so what we took was a pass-along size picture of the Savior and put that on the top of our branch. It actually made the branch bend over.

Now, brothers and sisters that memory of that little tree is very sacred to me. Normally, Christmas trees—at least when I grew up—we had a star on the top representing the star that led the wise men to the Savior. We decided to skip the middleman and go straight to Him; therefore, we didn’t have a star.

Then there was the eagerly anticipated call home. Those of you who have served a mission know what a sacred experience that is. The problem for me was, was twofold. Number one, I was really discouraged, and I didn’t want to sound negative on the phone when I called my family. Secondly, my family was not members of the Church. They thought I was wasting my time serving as a missionary, and I was very concerned that I would sound negative in a way that they would feel confirmed in their feelings that I was wasting my time. So I had to gird up my attitude and sound positive when everything inside me was not. That was kind of an awkward experience.

Brothers and sisters let’s compare that to a phone call we can make to our Heavenly home at any time and at any place. We can talk to our Heavenly Father. Do we eagerly anticipate that call, which we call prayer? I would ask you to think about that. Those of you who have served missions, remember how anxious you were to call? Do we feel the same way when we say our prayers?

The next experience, brothers and sisters, was a dinner appointment. Now, missionaries love dinner appointments, but where I served in this particular town, they were few and very far between. But a sweet little old sister asked us the Sunday before to come to dinner. Now, I have to confess—brothers and sisters—I was not excited. This sister was from very humble circumstances, and I felt that the meager food we’d have in our apartment would far exceed anything she could offer us. I couldn’t have been more wrong.

When we walked into her little apartment, this sweet sister—I think she had spent more than half of her monthly food allotment in preparing a meal for these two missionaries.  Everything that was good and tasty was there. There was enough food to feed our whole zone. And as we were eating and she kept pushing more and more at us, she explained that she fed the missionaries out of gratitude for the two missionaries years before who had brought her the everlasting restored gospel, and this was her way of honoring us as servants of the Lord. She also did it to express her gratitude to her Heavenly Father for her blessings.

How could she be so grateful for so little? I want you to know, my dear friends, I walked out of that humble apartment different than I walked in. I realized it’s not what you have on the outside but what you have inside that are the true blessings of our Heavenly Father. That sweet sister taught me through that experience. In fact, she made so much food that she told us to come back the next day and finish what we didn’t eat.

But the most remarkable experience that happened to me that Christmas is this. In Finland, for those of you who don’t know, Finland is up by the Arctic Circle. In the summertime the sun doesn’t go down; it’s like this at midnight. But in the winter, it’s just the opposite—it is very dark and very cold. The sun would only come above of the horizon for about an hour and a half and wouldn’t rise very high in the sky. It was dark 22.5 hours a day. Brothers and sisters, I have to admit that the darkness of the country had penetrated my heart. I felt darkness, I felt coldness, I felt depression like I had never known because I was only thinking of myself.

That Christmas in Finland, something changed. Let me share with you a couple of things that changed.

There was a verse in the Doctrine and Covenants that struck me deeply. D&C 6:21:

“Behold, I am Jesus Christ, the Son of God. I am the same that came unto mine own, and mine own received me not. I am the light which shineth in darkness, and the darkness comprehendeth it not.”

What I was missing that dark, cold Christmas day? I was missing the Savior. For some reason, I had forgotten Him, and I had saw only the darkness. Consider this additional reference, John 8:12:

“Then spake Jesus . . . unto them, saying, I am the light of the world: he that followeth me shall not walk in darkness, but shall have the light of life.”

It wasn’t until years later that Elder Hales explained what happened to me that day in Finland. He said this: “Unless you are fully engaged in living the gospel—living it with all of your ‘heart, might, mind, and strength’—you cannot generate enough spiritual light to push back the darkness” (Robert D. Hales, “Out of Darkness into His Marvelous Light,” General Conference Apr. 2002).

Brothers and sisters, I must confess that’s where I was. I of myself was not generating enough light to push back the darkness, but because of the experience in that sweet sister’s home, because of the experience of a humble Christmas tree and a phone call from home, something began to change. And then, as I was concluding the day, I read some more from the Book of Mormon. 3 Nephi 18:24:

“Therefore, hold up your light that it may shine unto the world. Behold I am the light which ye shall hold up.”

Brothers and sisters, I came to understand, and understand even more fully now, that it’s the Savior that we need to hold up. That He truly is the light of the world. I love the fact that the Church in doing the 25 days of lighting the world to remind us and remind the world that He is the reason for the season.

Elder Hales also said this: “Wouldn’t it be pleasing to Jesus if we could let our light so shine that those who followed us would be following the Savior? . . . Will you be that light that will lead them to a safe harbor?” (Robert D. Hales, “‘That Ye May Be the Children of Light,’” BYU Speeches, Nov. 3, 1996.) I love his invitation to be a light, but to turn them to the Savior, not to us.

As we were concluding that Christmas day, we realized—my companion and I—that we had not exchanged gifts, and we realized that we had nothing to give each other. So what we decided to do was to bare our testimony to each other. That’s how I would like to conclude this.

My dear brothers and sisters, I give you my testimony of the living reality of the Savior of the world. He is the babe born in Bethlehem. He is the Redeemer, the Savior. He is my King. I am personally a beneficiary of His atoning sacrifice. I share you my witness that He is the Son of God and that He will come again. My hope and prayer, brothers and sisters, is that each of us will have more kind of like a missionary Christmas—that we might simplify it, that we might not get caught up in all the fancy things, but that we might remember that it’s about Him and about sharing Him with others. That Christmas helped me not to see the darkness, but to see the light. And even though it was still dark outside, it wasn’t dark inside because of Him. And of Him I bear witness, wishing you all a Merry Christmas, in the sacred name of the Savior Jesus Christ, amen.