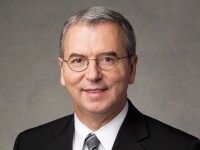 Elder Carlos A. Godoy was sustained as a General Authority Seventy of The Church of Jesus Christ of Latter-day Saints on April 5, 2008. At the time of his call, he had been serving as a member of the Seventh Quorum of the Seventy in the Brazil Area. He has served as a counselor in the South America West, Brazil, and South America Northwest Area Presidencies and as President of the South America Northwest Area. Elder Godoy was named a member of the Presidency of the Seventy on March 31, 2018. He currently has supervisory responsibilities working with three different members of the Twelve for the Brazil, South America South, and Utah Areas.

Elder Godoy received a bachelor’s degree in economics and political science from Pontifícia Universidade Católica in 1987. In 1994 he received a master’s degree in organizational behavior from Brigham Young University. He worked as the regional sales manager and national training manager of Johnson & Johnson. After he received his master’s degree, he became the human resources country manager for United Technologies–Otis Brazil Elevator. Following his employment with United Technologies, he worked as the South America human resources manager for Dow Corning. He then became a senior member of the board of directors for ZF Sachs in South America. In 2004 he started his own consulting company, CHANGE Consult–Organizational Development, specializing in organizational changes and restructuring.

Carlos Augusto Godoy was born in Porto Alegre, Brazil, on February 4, 1961. He married Mônica Soares Brandao on March 31, 1984. They are the parents of four children.