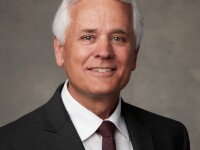 Elder William K. Jackson was recently called to serve as a General Authority Seventy and has been a witness to the growth of the “developing Church” around the world throughout his life.

Elder Jackson grew up in Ojai, California, “an idyllic little town in the mountains by Santa Barbara.” Due to his parents love of volunteer work, he also did school in Algeria, Honduras and Afghanistan.

Elder Jackson served in the Bolivia La Paz Mission from 1975-1977. When he returned, he met Ann Kesler. It was “love at first sight” for him. He spent the rest of the summer using his missionary skills to help “convert” Sister Jackson! They were sealed later that year in the Los Angeles California Temple.

Elder Jackson attended medical school at the University of California, San Francisco. He then worked at McKay-Dee Hospital in Ogden, Utah, for his medical residency for three years. From there they began their overseas life with the Foreign Service, which lasted 23 years, and included six years serving as an Area Seventy in Asia and the Pacific.

Elder Jackson described their journey around the globe those next two + decades as a “chiasmus.” They began in the Australian Outback, then went to India and to Africa (South Africa), then to Singapore, went back to Africa (Ethiopia), then India before returning to the Outback of Australia. Needless to say they both love to travel and experience new sights and cultures. In all, he has lived in, worked in and visited over 140 countries. Living abroad has provided Elder Jackson with the opportunities to be a Royal Flying Doctor, play professional football and basketball (but NOT in the NFL or NBA!), race camels, climb mountains, meet kings, presidents and Nobel prize winners and grow to love our remarkable Church members all around the world.

During that time, their family grew to a total of 10. Of their eight children, the last three were adopted from India, Nepal and Cambodia.

Immediately upon retiring from the U.S. Foreign Service the Jacksons returned to India, as president and companion of the India New Delhi Mission from 2009 to 2012.

Since returning from their years abroad, Elder Jackson has taught mission prep at BYU and worked at the MTC as a physician, and then moved to the Idaho-Oregon border to care for underprivileged patients before being called as a General Authority Seventy.