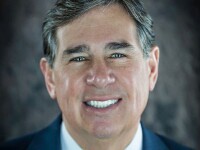 Evrett Benton is the President and CEO of Stellar Senior Living. He earned a bachelor's degree in economics from Brigham Young University and a juris doctorate from the University of Houston. Benton began his career as an attorney at Hunton Andrews Kurth LLP before shifting to associate, partner and managing partner of the same firm. He then served as executive vice president, general counsel, secretary & chief administrative officer at GranCare, Inc. before becoming co-founder, president & CEO of Five Star Senior Living, Inc. Benton has also served as Chairman of the Board of the Assisted Living Federation of America. From 2008-11, he and his wife, Cheryl, presided over the Argentina Buenos Aires West Mission, and from 2016-18, they presided over the Missionary Training Center in Buenos Aires. The couple have been married for nearly 50 years and have 14 grandchildren with two more on the way.