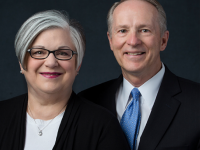 President Bruce C. Kusch became the 13th president of Ensign College on April 17, 2017. At the time of his appointment he had been serving as the Chief Academic Officer.

President Kusch began his academic career at BYU-Idaho in August 2002 as a member of the faculty of the Business Management department. In July 2008 he was appointed Associate Academic Vice President for Curriculum, serving in that role until June 2012 when he and Sister Kusch were called to preside over the Mexico Cuernavaca Mission.

Prior to joining the BYU-Idaho faculty, President Kusch worked in the high technology industry in Silicon Valley, CA in various sales, marketing, general management, and consulting roles. He earned a bachelor’s degree from the University of Phoenix, an MBA from the Keller Graduate School of Management, and a PhD in instructional design from Idaho State University.

Sister Alynda Kusch is a graduate of BYU-Idaho. Following her graduation, she taught Culinary Arts until she and President Kusch left for their missionary service in Mexico. If you know Sister Kusch at all, you know she is a master teacher, and master designer and creator of textile art.

Both born and raised in Southern California, President and Sister Kusch were married in the Los Angeles Temple in 1974. They are the parents of four children, and 15 grandchildren.