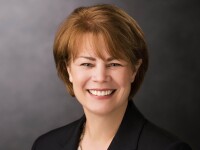 Sister Sharon Eubank is the first counselor in the general presidency of the Relief Society, the Church’s organization for its six million female members ages 18 and over. At the time of her call in April 2017, Sister Eubank was employed as the director of Latter-day Saint Charities, the humanitarian organization of The Church of Jesus Christ of Latter-day Saints, and she continues in her role as president while serving in the Relief Society.

Born in Redding, California, she is the oldest of Mark and Jean Eubank’s seven children. She served as a full-time missionary for the Church in the Finland Helsinki Mission and received a bachelor’s degree in English from Brigham Young University. After graduation, she taught English as a second language in Japan, worked as a legislative aide in the U.S. Senate and owned a retail education store in Provo, Utah.

Sister Eubank served on the Relief Society general board from 2009 to 2012, chairing the Relief Society presidency’s Public Affairs committee. She has also served in numerous ward (local congregation) and stake (diocese) leadership positions, most often as a teacher to men and women, youth and children in the Church’s Sunday School, Relief Society, Young Women and Primary organizations. She loves history, homemade pie and crossword puzzles. She has a strong testimony of the happiness that comes from following Christ.