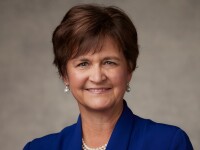 Sister Marcia Nielson was raised in McAllen, Texas. At the age of 17 she accompanied her parents to Santiago, Chile, where they presided over a mission. She attended Brigham Young University in Provo receiving a Bachelor of Science degree. While at BYU, she met and married Elder Brent H. Nielson in the Salt Lake Temple. The Nielsons moved to Twin Falls, Idaho, where they raised their family of six children.

Sister Nielson has served in a variety of Church callings, but her favorites have been working with the Young Women organization and as a gardener at the Twin Falls Idaho Temple. The Nielsons currently have 26 grandchildren.