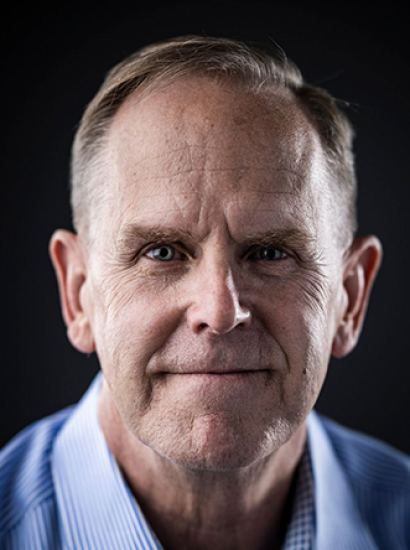 Tom Holmoe was born and raised in Glendale, California. He earned his Bachelor of Science degree from BYU in Zoology, continuing on at BYU to earn a Master of Science degree in Athletic Administration. He attended BYU on a football scholarship and went on to play football professionally with the San Francisco 49ers, followed by serving as head football coach at the University of California, Berkeley. Brother Holmoe has been Director of Athletics at Brigham Young University since 2005.

Good morning, brothers and sisters - G’ Day Mate, Guten Tag, Ciao. Wherever you may be in the world today - “It’s a good day to have a good day!”

How blessed we are to live in these times when the gospel of Jesus Christ has been restored to the earth and prophets of God are guiding us in these, the latter days. Though trials and temptations challenge us in our journey through this mortal life, we have so much to be grateful for. Disciples of Jesus Christ, throughout the world, arise each and every day with a strong faith in our Savior and Redeemer, and a hope that through His atoning sacrifice and resurrection that we will one day return to be in the presence of our Heavenly Father and His most Holy Son.

I believe that God lives and continues to bless his children upon the earth through the voice of His living prophets - just as he did in times of old. Through His chosen oracles, the prophets: Adam, Moses, Abraham, Jacob and Joseph, Isaiah, Jeremiah, Lehi, Nephi, Mosiah, King Benjamin, Peter, John the Revelator, and many more, the will of God - for all mankind - has been revealed. This vital mode of sacred communication between God and man continues today and blesses the lives of ALL who will listen and strive to live their lives in accordance with their divine messages.

Countries are governed and led by presidents, kings, prime ministers, and other men and women of various titles, who are voted into position or ascend to their position through family lineage. Peace and prosperity can be the results of exceptional leadership in some countries across the globe. Crucial decisions determined by these leaders are communicated daily that directly affect the lives of the citizens of lands far and wide. Policies and procedures, laws, and ordinances are dictated by those in power. Political, social, and ecclesiastical leaders come and go, as the hopes and dreams of their countrymen or followers rise and fall based on the results of their teachings.

Unfortunately, in today’s world, the wisdom of the wise is hard to find as many cultures continue to drift further and further away from righteous routines and holy habits, such as prayer, scripture study, keeping the sabbath day, serving the poor and needy, and seeking faith in a higher being. Relying on the “arm of flesh,” or the vast array of man-made philosophies, has surpassed faith in God and deceived and blinded many from the truth. A tsunami of daily information floods our technology, creating numerous conflicting opinions which can cause divisions, uncertainty, and even feelings of hate and resentment. Amidst the confusion, and sometimes chaos, one must ask the question, “Where can truth be found?”

Truth is found – and always has been – in the wisdom that comes from God who speaks to His children on earth through His prophets. The Old Testament prophet Amos proclaimed, “Surely the Lord God will do nothing, but he revealeth his secret unto his servants the prophets” (Amos 3:7).

President Gordon B. Hinckley reminded us that, “Ancient prophets not only warned of things to come but, more important, became the revealers of truth to people. It was they who pointed the way men should live if they were to be happy and find peace in their lives.” Satan and his followers are hard at work to do all they can to make it difficult to hear the voice of God revealed through His prophets.

Elder David B. Haight tells a story of being in attendance in Sydney, Australia, as the living prophet at the time, President Spencer W. Kimball, addressed members of The Church of Jesus Christ of Latter-day Saints of that country on what a prophet is and why we have one. In Elder Haight’s words, he recalled that President Kimball taught, “To be a prophet of the Lord one does not need to be everything to all men. He does not need to be youthful and athletic, an industrialist, a financier, nor an agriculturist. He does not need to be a musician, a poet, an entertainer, nor a baker, a physician, nor a scientist. He does not need to be a linguist, to speak French, German, and Spanish. But he must understand the divine language and be able to receive messages from heaven. He need not be an orator, for God can make his own. The Lord can present His divine message through weak men made strong. What the world needs is a prophet-leader who gives example, clean, full of faith, godlike in attitude, with an untarnished name – a beloved husband, a true father. He told them that a prophet needs to be more than a priest or a minister or an elder. His voice becomes the voice of God to reveal new programs, new truths, new solutions. He made no claim of infallibility. He must be bold enough to speak truth, even against popular clamor for lessening restrictions. He must be certain of his divine appointment, of his celestial ordination, and of his authority to call to serve, to ordain, to pass keys which fit eternal locks.”

Though many leaders worldwide are inspired from on high, have important information at their fingertips from vast amounts of research, or have the charisma to uplift and motivate their followers, there is only one CALLED who is the Lord’s living prophet. He is the one man on the earth at a time who can both hold and exercise the keys of the kingdom in their fullest (D&C 132:7).

As members of The Church of Jesus Christ of Latter-day Saints, it is our sacred duty to share our testimony with every nation, kindred, tongue, and people that Jesus Christ is the Savior of the world. That through His death and suffering on the cross at Calvary and in the Garden of Gethsemane, He atoned for the sins of the world and was resurrected to live again and rule and reign in His kingdom forever. Because of His divine sacrifice – that carried out our Heavenly Father’s Plan of Salvation to perfection – we too will live again together with the Father and the Son.

A beautiful principle of this marvelous Plan of Salvation is that God continues to speak to His chosen servants. Just like prophets of old, who guided God’s people on earth through past dispensations, prophets – living today – continue to receive revelation for the benefit of ALL God’s children.

Our current living prophet, President Russell M. Nelson, repeatedly sounds the clarion call to ALL people, in ALL nations to “HEAR” the Savior of the world. He is well aware of the constant “noise” that drowns out divine instruction to both individuals and nations. President Nelson warns that without celestial communication from on high, we will often be fooled by the plethora of false messages that we must constantly wade through if not directed to the truth through God’s word.

In recent years, a worldwide pandemic, political upheaval in many countries, cries of poverty in the streets, racial injustice, and a myriad of many more challenging issues have people of all nations yearning for peace on earth. There are those that have continued to rely on their faith, religion, or spiritual beliefs to overcome these trials, but many, many more feel lost and hopeless in their struggles. Amidst the confluence of difficulties to deal with in life, our God reveals messages of comfort, hope, direction, and peace through a living prophet.

One way in which President Nelson inspires the people of the world – and YES, people in many nations listen to his teachings – is through extending numerous invitations that help draw God’s children closer to our Savior, Jesus Christ. Whether it is to Hear Him, Let God Prevail, Give Thanks, Root Out Racism, Come Follow Me, Light the World or the many other of his special invitations, those that take action and incorporate his prophetic teachings into their lives, find peace, hope, joy, happiness, and love even when surrounded by the many challenges life brings.

My love for the Lord continues to increase as I feel the Spirit each time I read the words that prophets have written in the holy scriptures or hear their voice as they speak revealed truth from God. Their calling as special witnesses of Jesus Christ and their strong and penetrating testimony of His love is true. May we all be anxiously engaged in following the prophets, prayer, worshipping the Savior, scripture study, providing service to others, and ANY other effort that will help bring us into the loving arms of our Savior who gave His life to gather all his Father’s children.