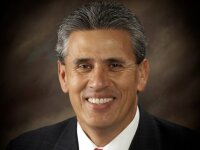 Brother William Riggins joined the Church at age 14. He served a mission in Santiago Chile. Married Bonnie McKee in the Los Angeles Temple on November 30, 1979. He worked in the swimming pool industry for 20 years. He taught early morning seminary for 12 years. He received his bachelor’s and master’s degree from San Diego State University. He served as director of the Institute of Religion adjacent to San Diego State for 11 years. He earned the degree of Doctor of Education in Educational Leadership and Management from Alliant International University in 2006. He joined the Religion Department faculty at BYU-I in 2006. He currently serves as a religion teacher, the Director of the Student Honor Office, and Chief Inclusion Officer at BYU-Idaho.

Brother Riggins has served as a Bishop, Stake President, and President of the Ecuador Guayaquil North Mission. Brother and Sister Riggins are the parents of four children and have 13 grandchildren.