The inaugural ceremony was held at 11 a.m. in the Assembly Hall on Temple Square. The entire LDSBC community – students, faculty and staff – were joined by members of the school’s board of trustees, representatives from other Church Educational System schools, donors, community members and members of the Kusch extended family to witness the inauguration.

Following the ceremony, an inaugural luncheon for family and friends was held in the Joseph Smith Memorial Building.

Later in the afternoon, a public reception was held at LDS Business College where students, faculty, staff, Kusch family members and the community were invited to celebrate the inauguration. Gifts were presented to President and Sister Kusch by Cathy Carey, co-chair of the inauguration planning committee and director of curriculum and academic programs at the College.

The College gave commissioned works of art to the Kusches. Sister Kusch received a quilt and President Kusch received a portrait of the Savior titled Discipleship, by LDS artist, Dan Wilson, with a quote from his inaugural response remarks: “Our mission as an institution is to develop capable and trusted disciples of Jesus Christ, and we must never lose sight of that.” 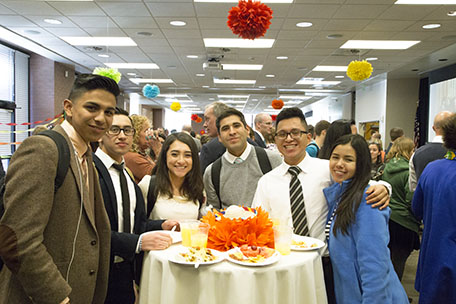